September 28, 2015 5:00 am
1.2k
SHARES
Share on FacebookShare on Twitter
SAN DIEGO, California — When the Infiniti EX35 came to the U.S. as a 2008 model, it tried to tell us that it was a different kind of crossover. It had a tall profile like a pumped-up station wagon, only the hardware came from the Infiniti G35 sport sedan. This crossover was about fast driving to faraway vacation destinations, not quick errands to the neighborhood grocery store. Unfortunately almost no one in America was really listening.
Now what has become the 2016 Infiniti QX50 has been stretched into a longer, more practical passenger package. Yet it still wants you to understand that fast driving and fast living are part of its personality, and it tries to measure up to the Audi Allroad, BMW X4, Mercedes-Benz GLC, and Porsche Macan. But still we’re not sure that anyone will understand. Maybe this Infiniti should come with German subtitles. 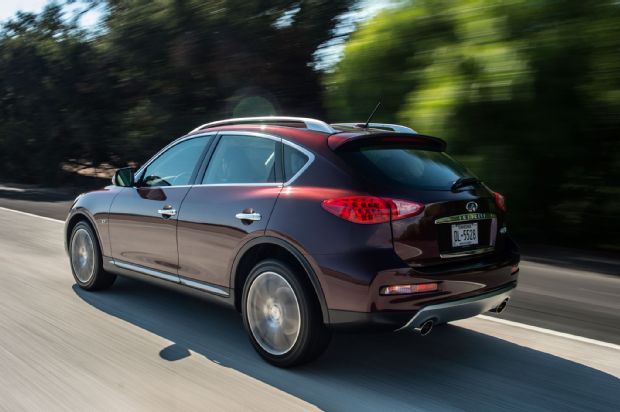 A G-wagon built in Japan

It’s a little out of the ordinary in these days when Japanese-label vehicles are built in U.S.-based production facilities, so you might note that the Infiniti QX50 is actually built in Japan, and it has a certain style and impression of quality that you don’t see in something from Germany (or Austria, Czech Republic, Hungary, Slovakia, or wherever).

The hardware here is the familiar rear-wheel-drive platform from what was once the Infiniti G35, while the engine is the equally familiar Nissan VQ-series V-6. But just because these things are familiar, let us also remember that no other company in Japan has built a sport sedan as terrific as the Infiniti G. 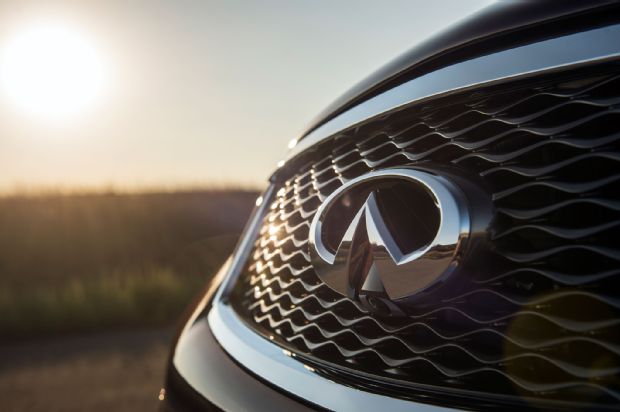 Just as with the original EX35, the 2016 Infiniti QX50 has been creased and folded into a more passenger friendly package than a sports sedan, only now the wheelbase has been stretched 3.2 inches to 113.4 inches. This delivers a dramatic increase in rear-seat legroom by 4.3 inches and rear-seat kneeroom by 3.9 inches. Where the rear seat of this vehicle used to be child-size, now it is uber-size, and you might even be tempted to take some full-size friends skiing on a weekend instead of just dining on a Friday night. 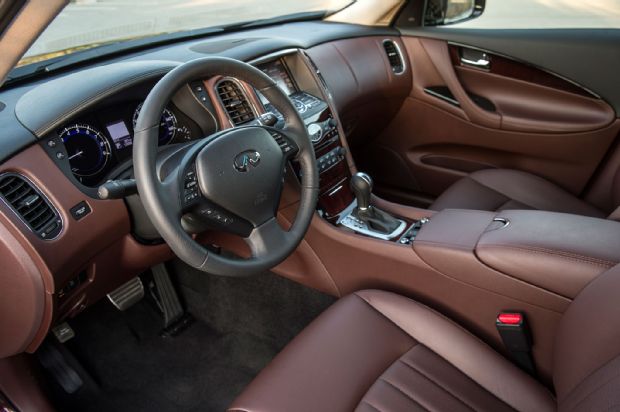 
The QX50 incorporates all the features in Infiniti’s great big basket of features and technology. Leather upholstery, an eight-way adjustable driver seat, and 7.0-inch touchscreen monitor come as standard equipment, while a premium 11-speaker audio system, navigation, around-view sonar parking assist, and little tricks like a coat hanger that deploys from the back of the front-seat headrests are part of the option program, as well as rear seat backrests that can be powered upright from their cargo-friendly reclining position. 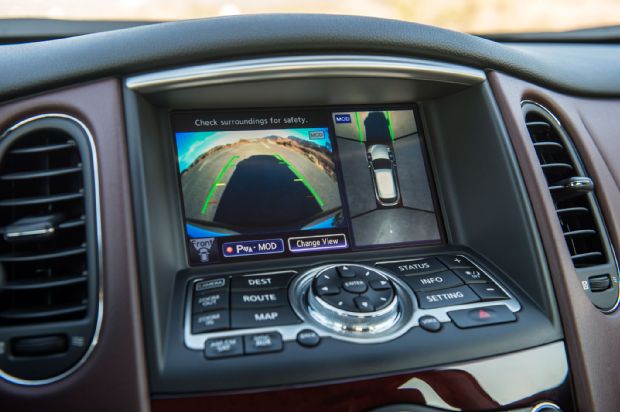 And if you haven’t been in a new car in a while, you’ll be overcome by the QX50’s range of active-safety features, including blind-spot monitoring, lane-departure warning and prevention, brake assist with forward collision warning, and cruise control that will not only maintain a pre-set following distance but also brake the car to a full stop if necessary. Such things are available from many manufacturers these days, yet we’re still staggered by the real improvement in driving safety these things offer. You’ll never again be intimidated by stop-and-go traffic in Atlanta, Chicago, Los Angeles, or New Jersey.

For all this sensible appreciation of the QX50’s merits, we actually like this vehicle best because you can drive it really, really fast. The 3.7-liter V-6 is rated at 325 hp @ 7,000 rpm and 267 lb-ft of torque @ 5,200 rpm. This doesn’t sound like much in a vehicle that weighs 3,855 pounds in its rear-wheel-drive configuration or 4,020 pounds in all-wheel-drive specification, but we didn’t have any problems getting our heart pumping on the twisting forest roads high in the mountains behind San Diego.

The quick-shifting seven-speed automatic transmission from Mercedes-Benz (Infiniti’s new technology partner) helps the V-6 come alive, and the old-fashioned hydraulic-assist power steering reassures you in the corners. The 2016 QX has been jacked up 0.8 inches higher into the air than before on its 225/55R-18 tires, yet the suspension is so thoroughly and effectively damped that the chassis never makes a misstep, either on mountain roads or coastal freeways.

There’s no sense of struggle here no matter what the challenge might be. Even the all-wheel-drive system does great work in a performance-style vehicle like this because it biases power delivery completely to the rear wheels until wheel slip is detected, then its famously quick-responding, electro-magnetic, central clutch pack diverts power to the front wheels.

Let me explain things to you

As much as we enjoy everything the 2016 Infiniti QX50 is about, we’re still skeptical that it will find many friends. When it arrived as the 2008 EX35, it looked like a wagon just when everyone wanted an SUV, and now that the 2016 QX50 has arrived with a new complement of Infiniti design themes and a taller ride height, it looks like an SUV when everyone wants a heavily styled wagonette. Even Infiniti itself has come to see this vehicle as competition for the Acura RDX and Lexus NX, which seems like a low target to us.

And for all the increase in rear-seat room, this variation of the Nissan FM platform (front midship) is still relatively narrow and still relatively confining as a package for passengers and cargo. When you look at the center stack of controls, you also see the same buttons and controls made familiar by the G35 sedan, and probably no one but us will understand that they represent a high-water mark in ergonomic friendliness and intuitive utility. The 2016 QX just doesn’t deliver the right kind of style, and so its message of speed and utility seems once again lost in translation. 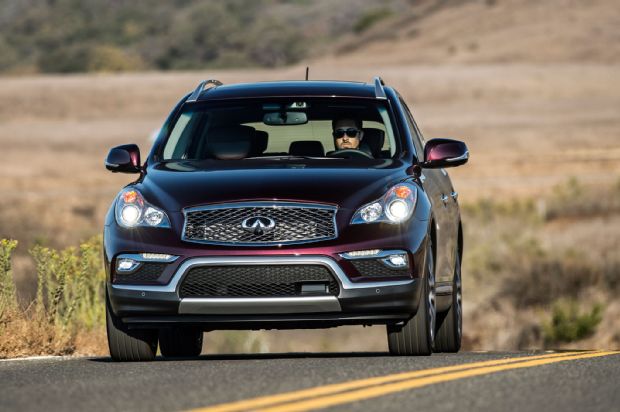 Of course, the 2016 Infiniti QX50 has one thing its German rivals do not, which is a screaming cheap price. Infiniti sales execs have decided to pack lots of features into their 2016 models and either charge no more or even charge less. As a result, you can step into a 2016 Infiniti QX50 AWD for an MSRP of $35,850, then pack it with every option group just like our test car and be looking at $44,935 including $995 destination. Even better, the longer-term Infiniti warranty now stands at 4 years/60,000 miles and includes free maintenance.

You could probably have two QX50s for the price of a single Porsche Macan, and you might even win the race to the ski resort besides. 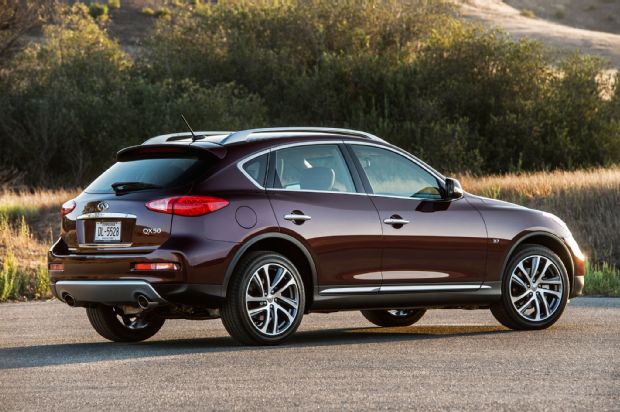