September 21, 2015 3:27 pm
3.6k
SHARES
Share on FacebookShare on Twitter
The 2016 Ford Focus RS is poised to take on the Subaru WRX STI and Volkswagen Golf R, albeit with substantially more power, torque, and a hooligan-spec Drift Mode. New information from Ford also confirms what we all suspected—a competitive sub-5-second sprint from 0-62 mph and a starting price of $36,605, nestled right between its rivals.

A video courtesy of Ford Europe gives us an early taste of the snarling exhaust note and tire-shredding capability of its long-anticipated hot hatch. The 2016 Ford Focus RS, using its available launch control function, can eclipse 62 mph in 4.7 seconds. Ford tells us it will announce an official 0-60 mph time for its U.S.-spec cars very soon, but we expect a reduction to 4.6 seconds.

That’s very quick, but not anything well beyond the Golf R and WRX STI. The Golf R hits the mark in 4.5 seconds with its dual-clutch automatic transmission (5.3 with a manual), while the manual-only WRX STI also does the deed in 4.6 seconds. All versions of the 2016 Ford Focus RS come standard with a six-speed manual gearbox, and a turbocharged 2.3-liter four-cylinder making 345 hp and 325 lb-ft of torque, while the Golf R and STI make do with 292 hp and 280 lb-ft, and 305-hp and 290 lb-ft, respectively.
We have high hopes for the 2016 Ford Focus RS, and 0-60 times don’t tell the whole story. The Euro-bred hot hatch has an advanced torque-vectoring all-wheel-drive system, sticky Michelin Pilot Super Sport summer tires, and Recaro bucket seats that could turn it into a serious trump card at the ultra-hot-hatch table.


The good news is that despite the added performance potential, starting price for the 2016 Ford Focus RS is just what we predicted back in February. For $36,605 including destination, the Focus RS comes with SYNC 3 infotainment, start/stop, Recaro partial-leather bucket seats with RS logos, and a 10-speaker Sony audio system. Stand-alone goodies include 19-inch black-painted, forged alloy wheels with Michelin Pilot Sport Cup 2 summer track tires ($1,990 together, or $1,395 for the wheels alone), or an $895 power moonroof. Available colors include Shadow Black, Frozen White, Stealth Gray, and Nitrous Blue ($695).


The main option Ford is offering is the$2,785 RS2 Package, which bundles an 8-way power driver seat, full-leather Recaro seats with Dinamica inserts, heated mirrors, heated front seats, a heated steering wheel, and navigation, bringing the total up to $39,390. Comparable packages on the competition bring totals to $39,910 for the Golf R, and $40,790 on the WRX STI. 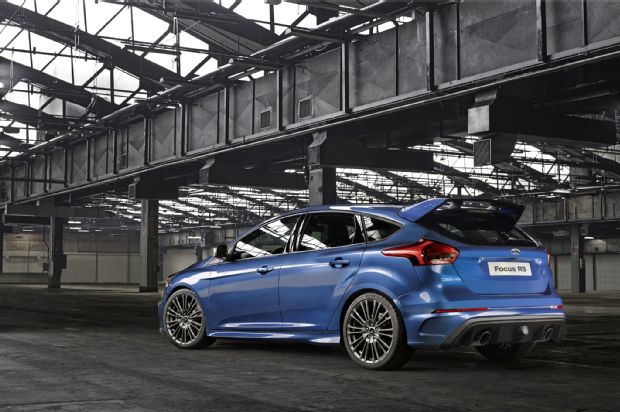