We realize that by now you’ve probably caught up on the basics of the 2020 Porsche Taycan after it was revealed on Wednesday. For instance, you know that Porsche designed the Taycan around a new 800-volt electrical architecture, that it offers a suite of advanced suspension systems, and that Porsche stuck to a mantra of repeatable performance in the Turbo or Turbo S versions that were shown.

But wait, there’s more. Two weeks ago we attended a confidential backgrounder about the Taycan, in which Porsche revealed much more than basic specs. With insight gained there about why Porsche did things the way it did, we bring you six more surprising tech details of the 2020 Porsche Taycan. 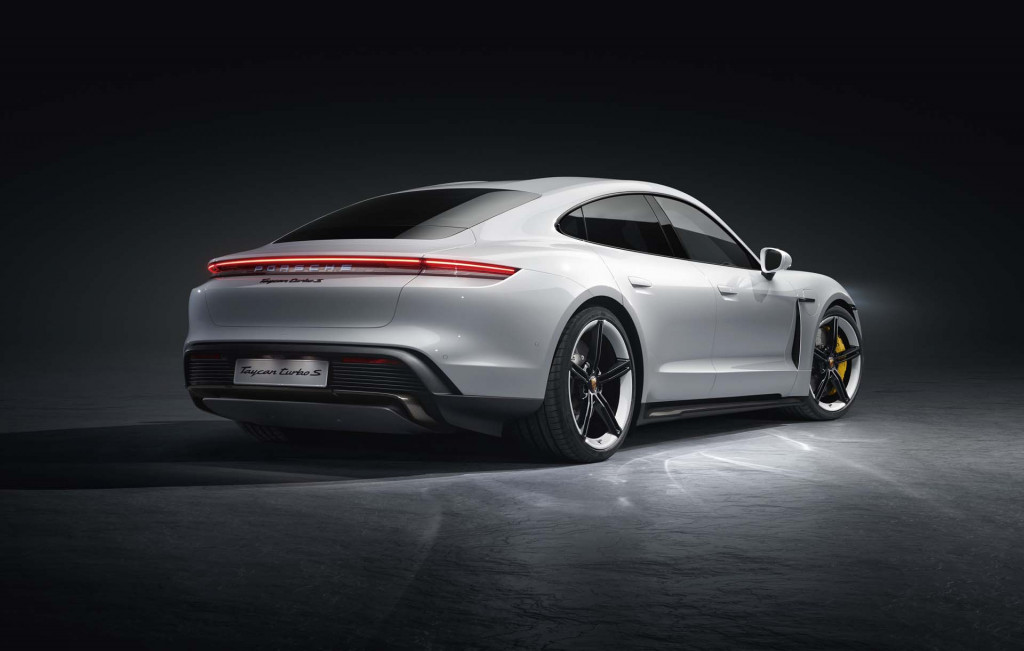 When set to Range mode and running in light-load, low-speed cruising conditions, the Taycan decouples the rear motor and moves along with its smaller front motor to be more efficient. But you’ll likely never know as the rear motor reaction time is down to single milliseconds—a tenth the time it takes conventional all-wheel drive to respond, according to Porsche. This strategy is similar to what’s used in the Tesla Model S with the revamped power systems it received earlier this year.

A transmission you can’t shift.

The two-speed gearbox used for the rear was designed internally at Porsche and chosen for its combination of super-strong launch capability and its ability to accommodate all 450 pound-feet of torque that the Turbo S’s rear motor can deliver. The gearbox can handle some motor torque while it’s shifting, and it can perform the shift almost as quickly as a dual-clutch gearbox, Porsche says. Probably the weirdest thing of all—especially from a sports-car brand—is that you won’t have specific control over when those shifts occur. Porsche says it depends on driving style and the drive mode: In Sport+, the Taycan will stay in first all the way to 65 mph before shifting, but it avoids first completely in the Taycan’s Range mode. 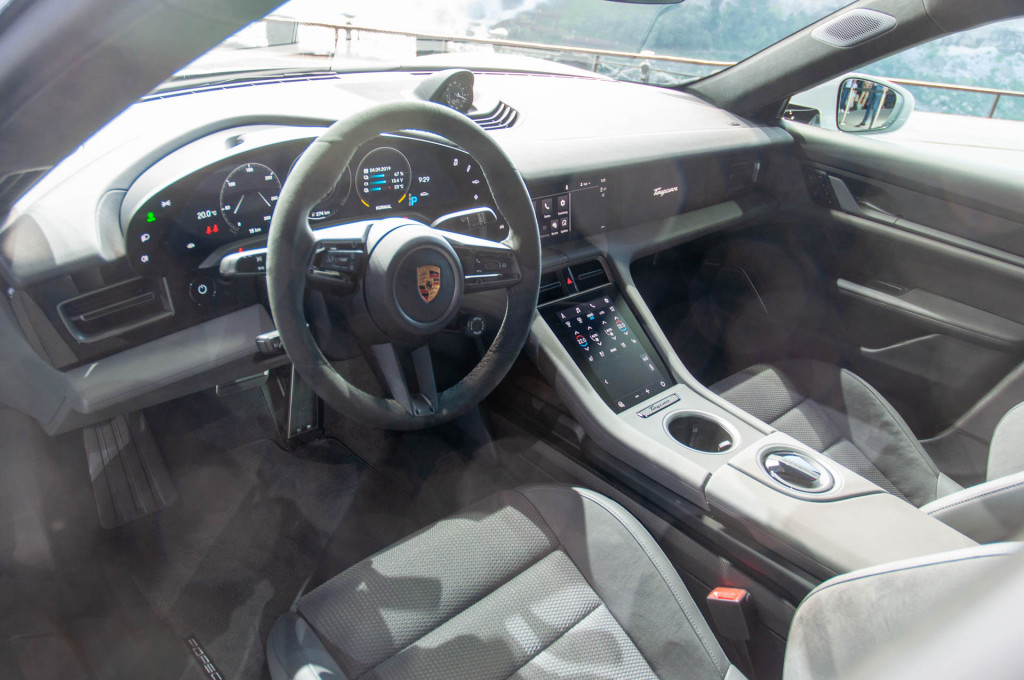 One-pedal driving? Forget about it.

Tesla has embraced one-pedal driving, and so have several automakers with electric vehicles, such as BMW and Jaguar. But Porsche has no plan to go with one-pedal driving—even in a more aggressive performance modes—in the 2020 Taycan.

Why? Simply put, the sports-car maker believes that it’s more efficient to coast, and leaving the strong deceleration for the brake pedal is a better choice for performance. Head over to Green Car Reports for a deeper dive as to why. 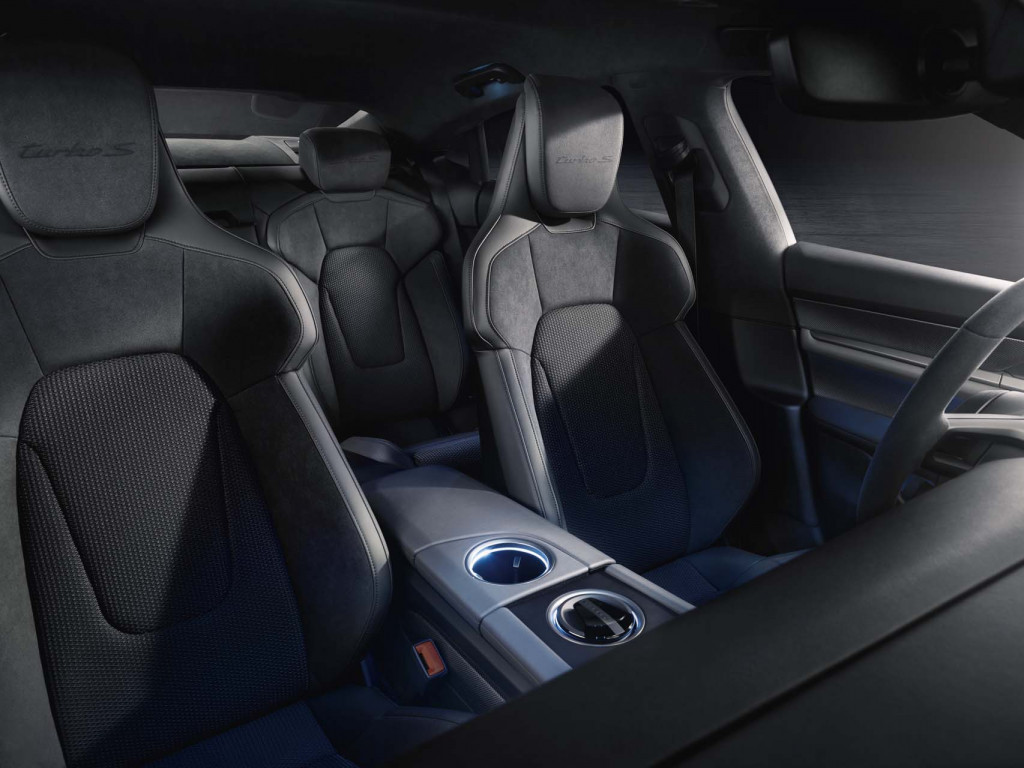 It whistles while you work.

Should electric cars make noise inside the car? Outside the car? Electric-vehicle enthusiasts are split on those questions.

For Porsche, the answer on both counts is yes—but in the Taycan’s case, it’s just as a tease. During a high-spirited driving demonstration with the cars two weeks ago at the Porsche Experience Center in Atlanta, we could hear the high-pitched whine of the motors, and perhaps the whir of its reduction gears, from many car lengths away.

The cabin ambiance was the surprising part. Porsche has sought to exorcise the high-pitched whine, which can be exhausting on long trips, while keeping some of the other sounds. Check an option box and you can get the Porsche Electric Sport Sound, which uses the audio speakers to play a well-coordinated sound supplement that takes it down an octave or two to a low-pitch whistle that still sounds electric. 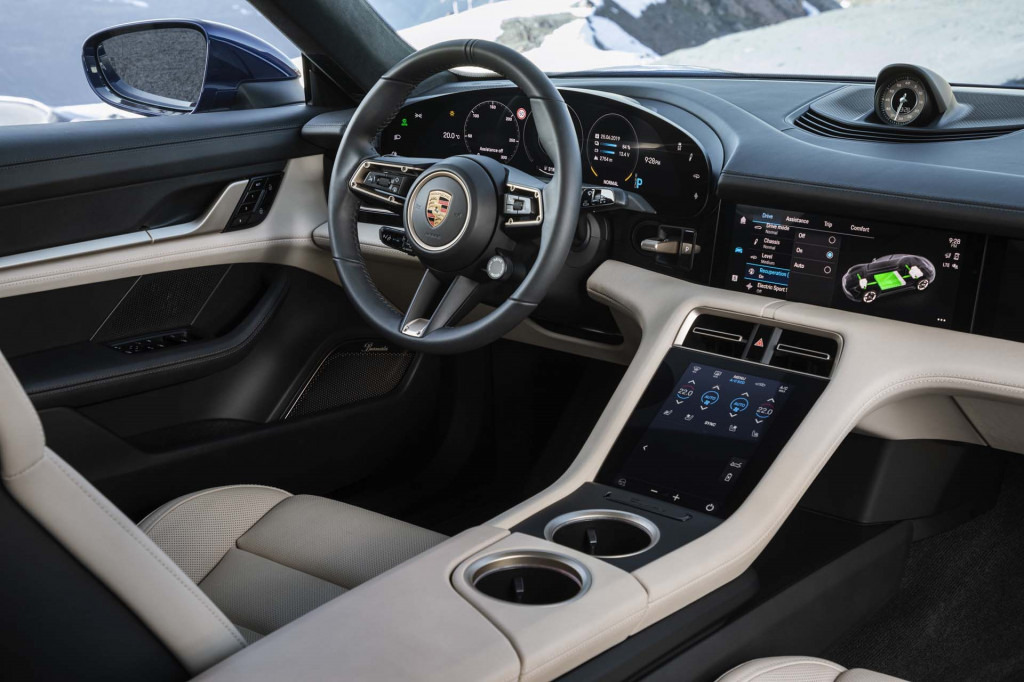 So many screens, so few buttons.

Porsche gave some early indications that it was planning to streamline the Taycan’s interior. To make performance driving easier, the company’s interiors have always put information directly in front of the driver. The way those philosophies come together in the production Taycan interior is anything but minimalist. Porsche shed nearly all tactile buttons and is equipping the Taycan with up to five screens. The rundown:

-A reconfigurable screen directly in front of the driver serves the function of a gauge cluster
-The largest, a central 10.9-inch touchscreen in the middle of the dash, serves as the go-to point for navigation, audio, and more
-A screen below that houses climate controls and includes haptic feedback as well as writing recognition
-Over to the far right, an individual screen allows the passenger to help navigate or play DJ
-At the back of the console, another screen for rear climate settings. 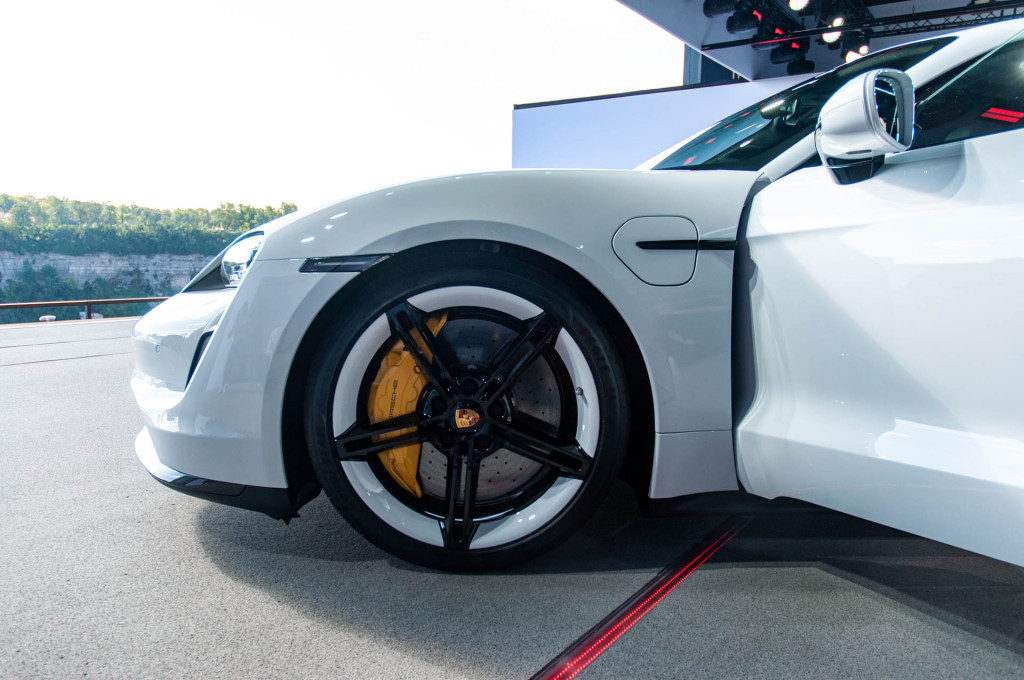 Your own icebreaker, if the car isn’t enough.

The Taycan’s charging door design is power-operated and has its own icebreaker—a conversation starter, but really, also an icebreaker. When the door is frozen over, it will rattle itself back and forth with double the normal amount of torque. The Taycan has two of them, just behind the front wheel wheels. DC fast charging is on the left side, while AC charging is on the right.

← Tesla Model S vs. Porsche Taycan: How the two electric cars compare Will Smith is back in a Porsche 911 as Mike Lowrey in "Bad Boys For Life" →