Hyundai announced during the unveiling of its redesigned 2021 Elantra sedan back in March that a sporty N Line version would be coming up shortly.

On Tuesday, we got a tantalizing taste of the compact sport sedan in some teaser material. Hyundai is short on specs but we know the Elantra N Line will feature powertrain and chassis mods, along with a few visual tweaks.

N Line refers to sportier versions of existing Hyundai models that are a step below full-bore N models such as the Veloster N, which incidentally has received an 8-speed dual-clutch transmission for 2020.

Hyundai has never built an N Line version of the Elantra sedan before, but it currently sells an Elantra GT N Line hatchback, and that car’s mechanicals featured in the previous Elantra Sport. Thus, the upcoming Elantra N Line essentially replaces the old Elantra Sport.

The Elantra Sport came with a 1.6-liter turbocharged inline-4 that made 201 horsepower and 195 pound-feet of torque. The engine was coupled to a 7-speed dual-clutch automatic transmission and was briefly offered with a 6-speed manual as an alternative.

The Elantra Sport also featured subtle exterior and interior styling changes, as well as upgraded brakes and suspension. The biggest change was a switch to independent multilink rear suspension, in place of the torsion beams used on lesser variants. 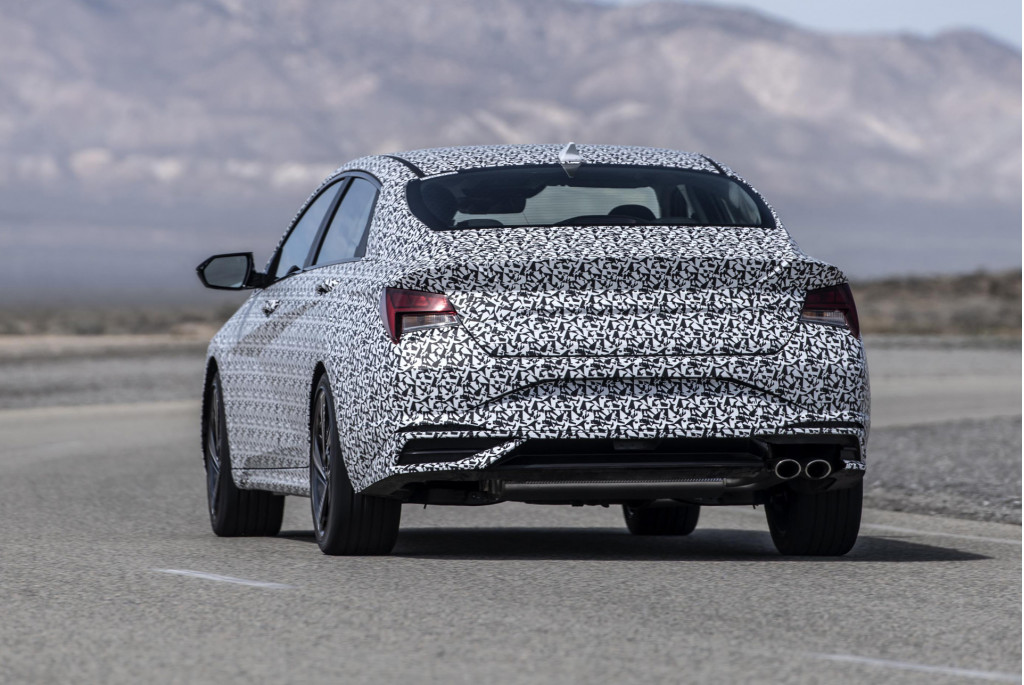 Expect the upcoming Elantra N Line to follow a similar pattern, with a model-specific powertrain and some suspension upgrades, but remaining a step below the Veloster N in Hyundai’s model hierarchy. That’s also the case with the Sonata N Line Hyundai announced in late 2019. A more powerful engine, dual-clutch transmission, and small suspension tweaks make the N Line sportier than a standard Sonata, but not a full-bore N model.

Some Elantra N Line upgrades we know are coming are 18-inch wheels, uprated brakes, and a subtle aero kit that adds side skirts and a rear diffuser.

Hyundai is also expanding its N performance sub-brand to crossovers. A Tucson N Line was unveiled in 2019, although Hyundai has not discussed bringing it to the United States. Hyundai is also working on a Kona N and the smaller Venue may receive the N treatment, too.

The redesigned 2021 Elantra sedan goes reaches dealers in late 2020, with the N Line variant likely to arrive by then. Potential rivals include the Honda Civic Si and Volkswagen Jetta GLI.