Hyundai has revealed some first photos and video of its upcoming Ioniq 5 electric SUV, set for a debut in February and to go on sale this fall.

These are the first photos of the Ioniq 5 in prototype form, and it sure looks a lot like the 45 concept, as revealed in September 2019 at the Frankfurt auto show.

The company said that the Ioniq 5 will be the first Hyundai with a clamshell hood, spanning the entire width of the car and helping erase any visible panel gaps. A Parametric Pixel theme for the 20-inch wheels and optimized proportions add up to something that stands apart from anything else in Hyundai’s current lineup. 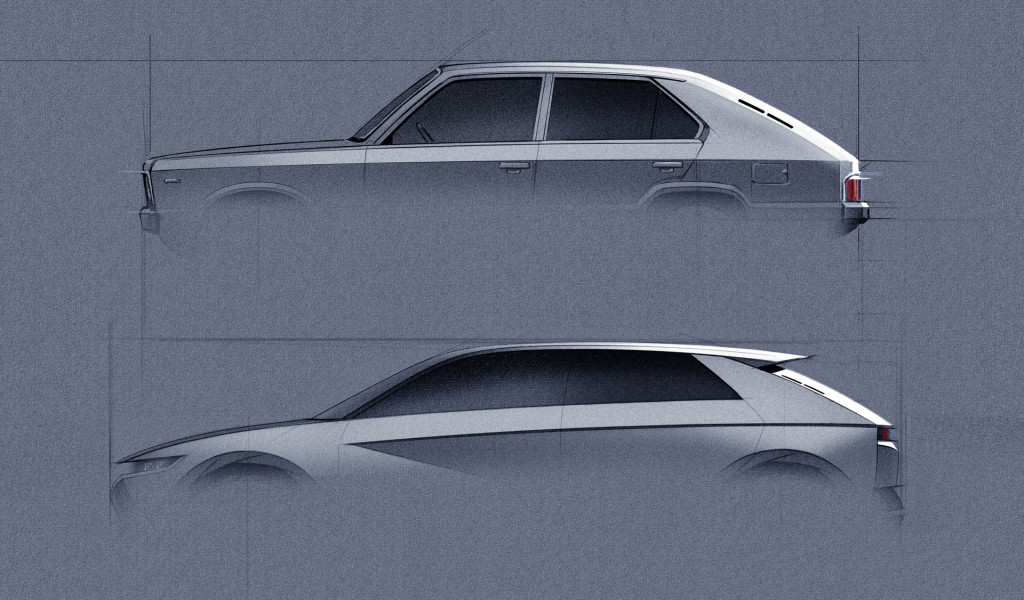 In person, at the auto show, we saw a direct line from chiseled hatchbacks of the 1970s, like the Volkswagen Dasher and the Plymouth Horizon, to the 45 concept—although Hyundai saw some inspiration in its original Pony, which was sold in Europe into the 1980s.

Hyundai called the 45 concept a “symbolic milestone for Hyundai’s future EV design,” and even said then that it showed the design direction of one of the first production EVs on Hyundai’s upcoming E-GMP dedicated electric platform.

The concept was 182 inches long, which makes it roughly the same size as the Ford Mustang Mach-E and slightly smaller than the Tesla Model Y.

“Beginning with IONIQ 5, our dedicated EV line-up brand will redefine the relationship between people and their cars, establishing a new standard against which all BEV design experiences will be measured,” said senior VP and head of the Hyundai design center SangYup Lee, in a release accompanying the photos.

Hyundai just in August announced that the Ioniq 5 will be the first of several models to be sold under the new Ioniq sub-brand, focused around EVs. After the Ioniq 5’s arrival to the U.S. and other markets later this year, the Ioniq 6—based on the Prophecy sedan concept—will arrive in 2022.

The company used several video shorts to tout the model’s fast-charging capability—more than 62 miles gained in 5 minutes—and a 3.5-kw vehicle-to-load functionality that, it suggested, might roast a turkey. Separately, Hyundai has said that the E-GMP vehicles will be able to charge to 80% in 18 minutes, and take advantage of 800V hardware. It will be ““the most power-dense system that Hyundai Motor Group has ever created.”