As if we weren’t already impressed with the 2020 Chevrolet Corvette’s performance stats, the car’s official quarter-mile time leaked on Tuesday, and it’s fast. Like, really fast.

A snapshot of a General Motors engineering booklet was posted on the fan site Corvetteforum.com, and later picked up by Motor1. It shows the C8 is capable of ripping down the quarter mile in just 11.3 seconds at 121 mph. And that’s presumably the time for the base car since its top speed is listed on the same sheet as 193 mph. A C8 with the optional Z51 performance package, which has a top speed of 184 mph, will likely scoot down the track even faster thanks to its more-powerful engine and traction-enhancing electronic rear differential. 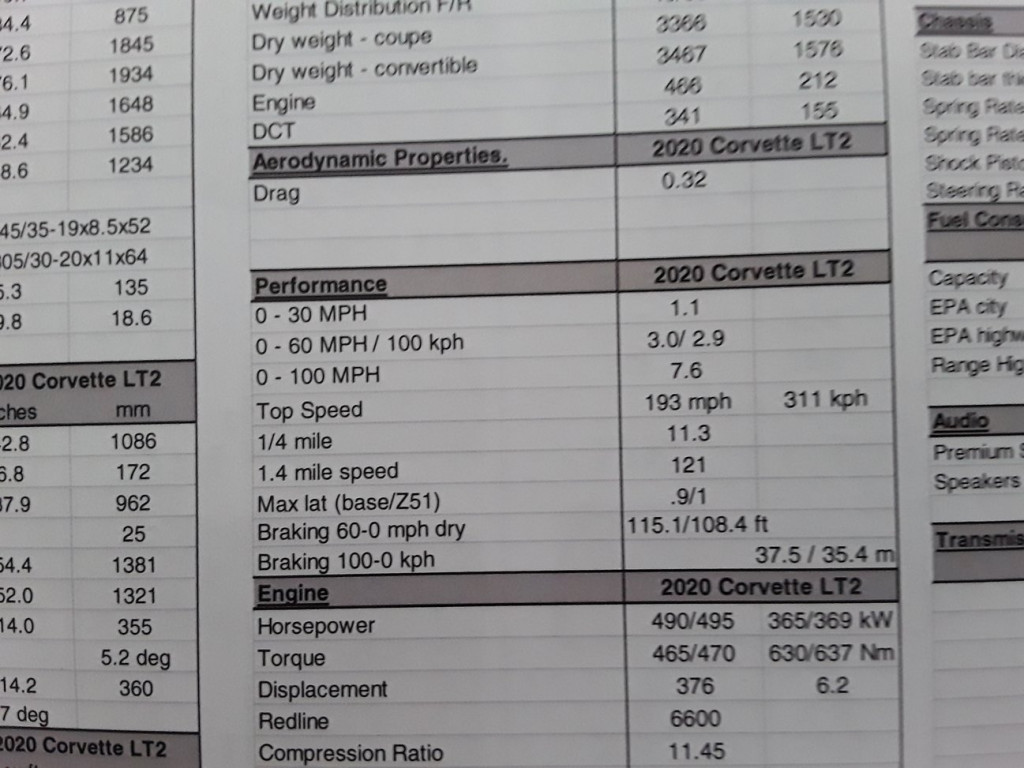 Motor Authority reached out to General Motors for comment and was told by Chevrolet spokesman Kevin Kelly that official performance specs for the C8 Corvette are not final. However, the leaked image appears to be legit, and the figures fall in line with the hard data we have on the sports car thus far.

Interestingly, braking performance is also listed on the sheet and shows the C8 can’t quite put on the clamps like the C7. A C8 with the Z51 package is listed as stopping from 60 mph in 108.4 feet, which is slightly longer than the 107 feet it takes the C7 Z51 to stop from the same speed. That difference is likely due to the weight distribution of the C7’s front-engine layout. More weight over the front wheels equals more grip to stop.

Chevy is reportedly working on a C8 model with 800 hp, and, given the performance of the base 2020 Corvette, we wouldn’t be surprised to see that variant dip into the 9s at the dragstrip.

What a wonderful time to be a car enthusiast.