Fiat Chrysler Automobiles starting in the second half of 2019 will roll out a new version of its Uconnect infotainment system powered by Google’s Android operating system and featuring new cloud-based services that you can take advantage of both in and out of the vehicle.

More and more automakers are choosing to rely on third-party systems for infotainment rather than spending the resources to develop a dedicated system. In most cases, the supplied operating system runs in the back end while at the front the user is faced with a brand’s specific designs for the various screens and menus.

FCA’s new Uconnect system will go a step further by offering services via a cloud platform developed by Harman, which is owned by Samsung. Examples of the services that will be offered include traffic updates, restaurant offers, fuel station and parking spot locators, and even live customer care. Vehicles will also be able to receive over-the-air updates via the cloud.

And as electric cars become more prevalent, users will be able to benefit from services such as remote battery management, vehicle-to-grid options, and more. 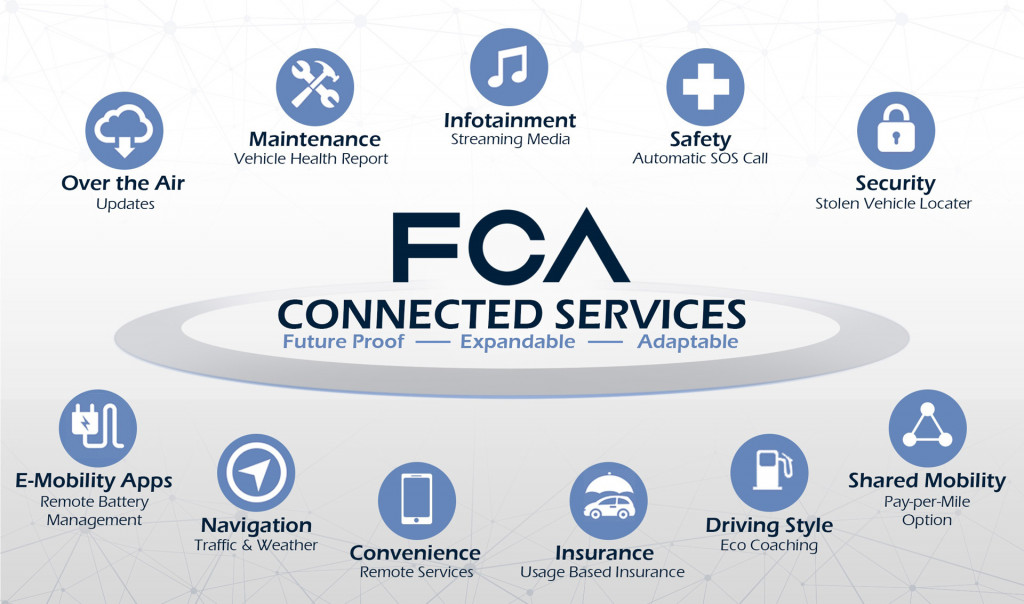 The technology will also make new mobility services possible, such as pay-by-the-mile and other forms of short-term rental, insurance based on actual vehicle usage, and peer-to-peer car sharing that at some future point could even be integrated with self-driving capability, turning a vehicle into a so-called robo-taxi.

In fact, FCA claims the new Uconnect system is future-proofed due to its support for upcoming 5G networks and so-called smart technologies. These not only include mobile devices but even new infrastructure being rolled out in some cities that will allow vehicles to communicate with things like traffic lights and signs.

“By selecting industry leaders such as Samsung and Google, we are making an efficient and responsible utilization of capital to provide advanced technological solutions to our customers worldwide,” FCA Chief Technical Officer Harald Wester said in a statement. “In collaboration with Harman, Samsung and Google, we have developed a flexible, easy-to-use and connected ecosystem that not only deploys today’s technology, but is also ready to integrate upcoming innovations.”

The introduction of the new Uconnect system across FCA’s fleet is expected to be completed by 2022.