Range is the new horsepower. Sustainability and charge ports are now status symbols as much as the luxury itself.

As I hustled the new plug-in hybrid version of Audi’s big extended-length A8L sedan—long-established as its traditional-luxury flagship—along country roads outside Munich, it seemed to most reflect an inner conflict that deep-rooted luxury automakers are feeling as they gear up for an electric future.

The luxury market is changing, and it’s being led by electrification. Engineers and executives from Gemany’s top automotive brands admit this readily enough once they are steered away from official talking points. The change surprises even them.

Audi’s three new plug-in hybrids, versions of the A7 hatchback, A8 sedan, and Q5 SUV, each now take on some of those juggled priorities with respectable 14.1-kwh battery packs and strong electric motor systems of up to 141 hp (105 kw). Likely badged “e quattro,” they’re all due to arrive in the U.S. by the middle of next year, probably quite a bit sooner. The fourth member of this new PHEV family, the A6, won’t come Stateside.

At once, the A8 is a paragon of tech-focused German luxury. With engineering wizardry like an adaptive air suspension, dynamic all-wheel steering, and customized contour seats, it warps the ride-and-handling rules of physics and makes the A8 feel like a smaller, more nimble car—an impressive feat on narrow German backroads. Stunning Bang & Olufsen sound, Night Vision assist system, and a suite of assist and connectivity systems put the A8 at the cabin-tech forefront.

And then there are the interior trims themselves. Our car, in Nutmeg brown Unicum leather, with Tourmaline Blue carpet, complimenting a Goodwood Green pearl exterior coat, was tight and superbly coordinated, and reminds us of how luxurious and special Audi cabins can feel.

Now for that inner conflict. Audi has built into its hybrid system a lot of flexibility—too much, we think. As with many of today’s plug-in hybrids—BMW’s iPerformance models, for instance—there’s a bewildering array of modes. 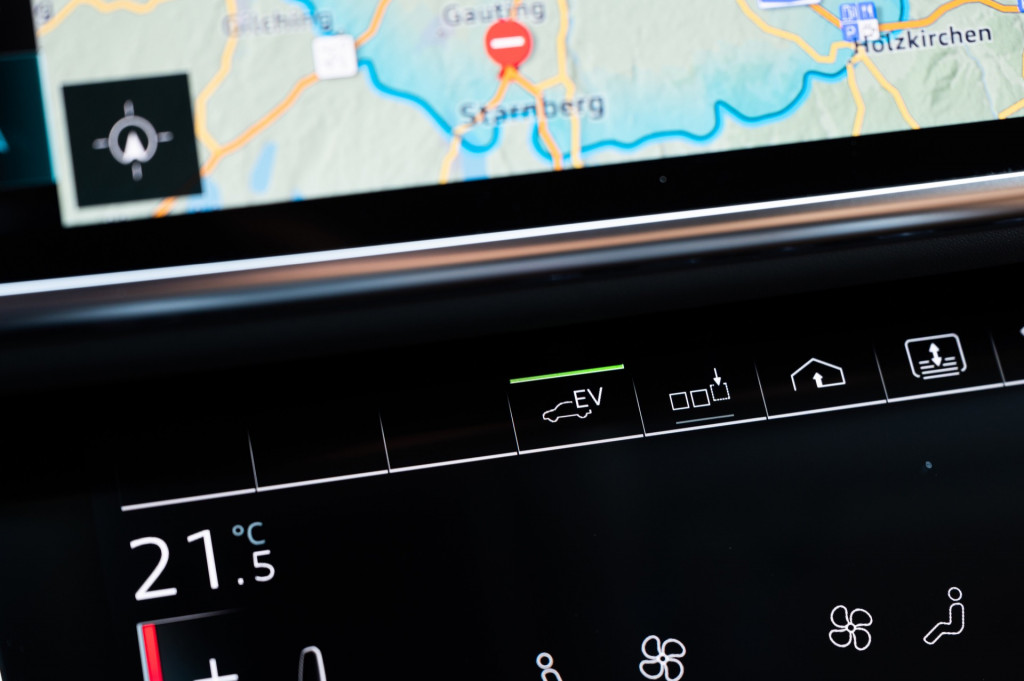 After looking at these multiple sets of modes in two vehicles and mapping it out, you’ll find the most important pieces are accessible through Audi drive select. Think Efficiency if you want to make the most of the electric mode, Dynamic if you want to keep the engine on and the sportier side on the ready—and unless you’re persnickety about what’s happening when, the rest will take care of itself.

The only real gamification here is toward the left side of the gauge cluster, with a sweeping power gauge. It shows you, in a zone transition from green to orange, when you’re headed from electric driving to “Boost”—meaning the internal combustion engine. In Efficiency (and EV Mode, as it would be after a charge), you have to peg the accelerator to have the engine start, but in other modes it’s lower (65 percent in Auto or 40 percent in Sport, for instance).

Labyrinth of modes aside, the A8 plug-in hybrid is straightforward and well-coordinated in the real world, as well as free of the clunky transitions and balky braking that fouled earlier plug-in hybrid efforts from some other luxury brands. Pure-electric driving is super-quiet and nearly all sounds of the e-motor are kept out of the cabin—and vibrations are kept out extraordinarily well. When you run through the charge or press too hard on the accelerator, you hear the gasoline engine start but don’t feel it. 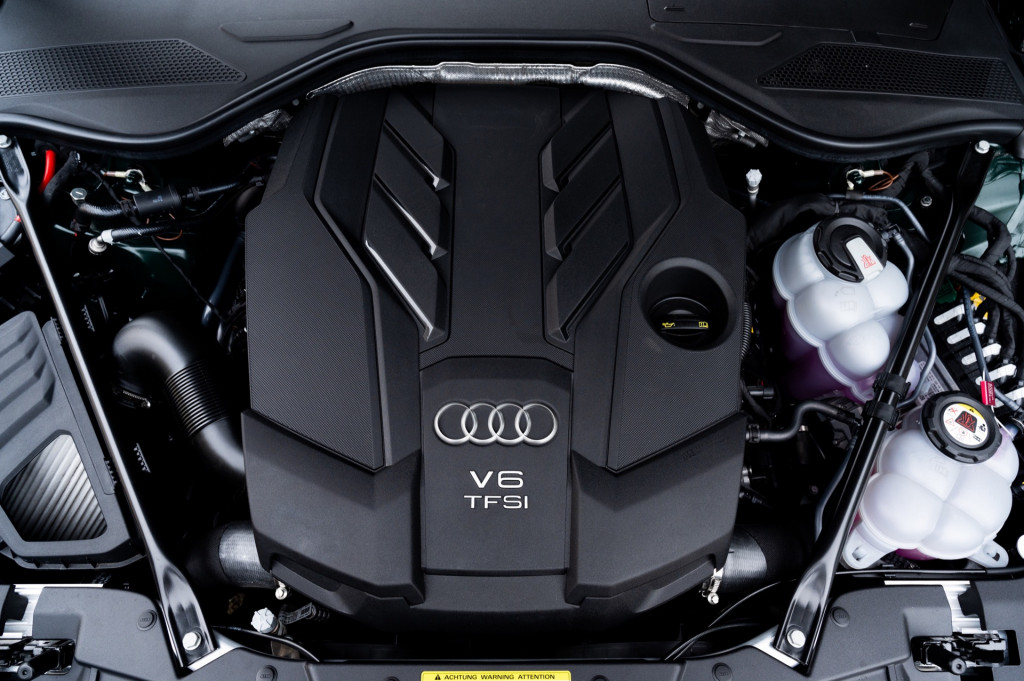 In the A8, that engine is a 3.0-liter twin-turbo V-6. In this application a 134-hp permanent-magnet electric motor is sandwiched between the engine and eight-speed automatic transmission, and Audi’s quattro all-wheel drive system remains intact. Total system output is 443 horsepower and 516 pound-feet of torque, and Audi lists a 0-62 mph acceleration time of 4.9 seconds.

And to its credit, the system allows the A8 to get all the way up to 84 mph in all electric mode.

In the A7 and Q5 plug-in hybrids, the engine is instead a 2.0-liter turbo inline-4, the motor makes 141 hp (for a total of 362 hp and 369 lb-ft), and the transmission is a seven-speed dual-clutch unit. See the first drive report on the Audi Q5 plug-in hybrid over at Green Car Reports for more information on that model.

By the accelerator and brake, an E-tron experience

Recuperation is one of the few areas in which the plug-in hybrids offer an experience that’s more in line with the Audi E-tron SUV—and, we would assume, with the rest of Audi’s upcoming EVs.

One of the biggest changes versus the last generation of plug-in hybrids is the system’s recuperation performance. It now can gain back up to 80 kw through the electric-motor system.

Lift off the accelerator at speed, and at higher speeds especially, the A8 plug-in hybrid glides along, with no indicated recuperation from the drive system. The “S” powertrain mode always gives you recuperation on accelerator lift. And separately, the car’s Predictive Efficiency Assist can crank the recuperation up to 25 kw without touching the brake. By pressing the brake, the new arrangement will allow that full amount, or about 0.3 g—a lot of energy back, and a real supplement to the brakes. 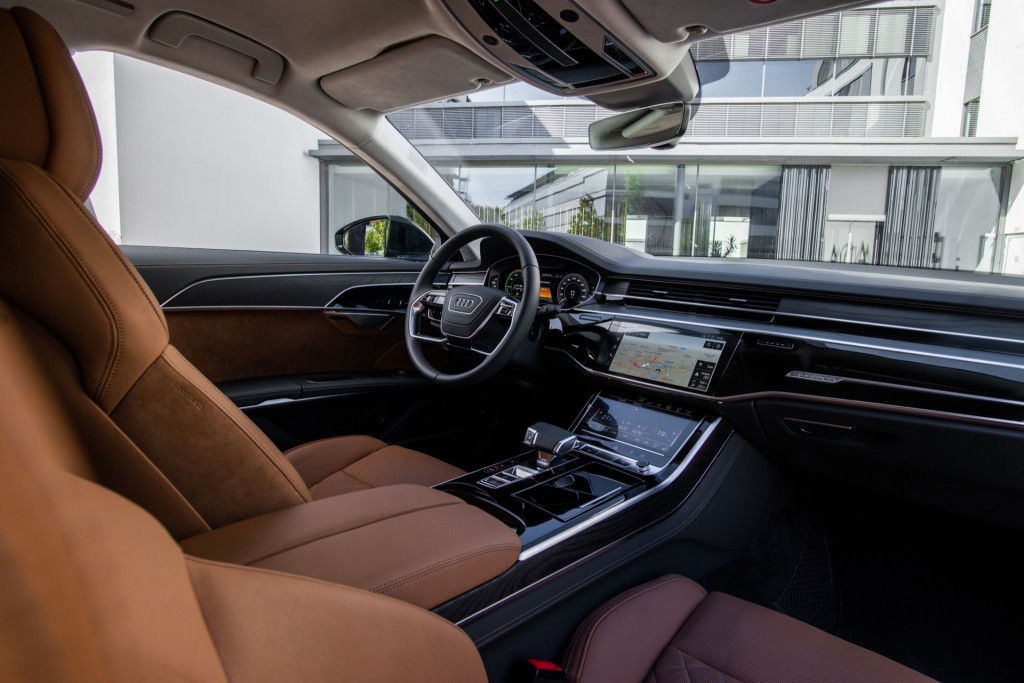 In the U.S. we won’t get some of the best features of Predictive Energy Assist, which will look deep into map data and anticipate topography up ahead and crank up electric boost or regen accordingly. But it will use regen to help keep safe following distances before the friction brakes.

One cool feature that we will be getting in the U.S. is Predictive Operating Strategy (PBS by the German acronym). When you set a route on the A8 plug-in’s navigation system, it will create “a plan for the entire route with the aim of driving with maximum efficiency”—essentially expanding the operating window for all-electric operation if it knows the trip is short.

Audi’s latest plug-in hybrids should be better on range on cold weather versus other PHEVs on the market, as they now all have a heat-pump system that can help scavenge waste heat from electrical components to heat the vehicle. Heat is otherwise resistive and A/C is electric; neither require the engine to be started, so the vehicle can be pre-conditioned while it’s still in the garage and attached to the charger.

Audi says that it anticipates 25 miles (40 km) or more of range for all three plug-in hybrids in the WLTP (European) cycle—which will almost certainly amount to more than 20 miles in tougher U.S. cycles. Our car’s trip computer estimated 27 all-electric miles (43 km) of range when we started out—plus another 379 miles (610 km) of range if we were to use up what’s in the fuel tank. But because we tapped into the engine “boost” several times we didn’t get a good tally in relaxed driving.

The A8 plug-in could be surprisingly fuel-efficient even when it hasn’t been charged. After we’d used up the charge, over about 25 miles of relaxed, moderate-speed rural and suburban driving, the system said we’d been averaging more than 38 mpg. Audi hasn’t released the curb weight for the A8 PHEV, but figure right around 5,000 pounds.

With a 7.4-kw onboard charger, the A8 plug-in can be fully charged at Level 2 AC charge points in just 2.5 hours.

Very understated as a plug-in

But you might not ever know the A8 e quattro has a charging port. The two strongest signals of the A8’s inner purpose for those who want to flaunt their eco-awareness are its charge-port door—on the left side, echoing the fuel filler—and its “e quattro” badging in back.

At the same time, Audi is looking to elevate the performance potential of plug-in hybrid powertrains in the next generation of RS performance models, for one example.

Marketing isn’t completely in place yet, let alone pricing, and Audi officials note that these latest plug-in hybrids are here to fill every possible demand on the way to fully electric. So to the point: Are they training wheels for fully electric? Or are they stepping stones to new performance potential?

Based on the responses we got, assume they’re both. And from this initial sample, in this sea change to electric vehicles, we’d say all the inner conflict is a great motivating factor. The A8 e quattro and the other plug-in hybrids part of this push are too good to get lost in translation.

← 2020 Honda Fit Hybrid with two-motor system likely for Japan and Europe, not the U.S. Chevy worked hard to make C8 sound like a Corvette—even with an engine in the way →