Henrik Fisker, legendary automotive designer and the man behind the now-defunct Fisker Automotive company, is getting ready for his grand return to the industry.

Spearheading the return will be the Fisker EMotion, which will arrive from the designer’s new company, Fisker Inc.

Although we only have preliminary specifications on the EMotion electric car, we now know when it will be revealed in the flesh.

After months of teaser images and digital mockups of the EMotion electric car, Fisker said the car will debut in January at the 2018 Consumer Electronics Show in Las Vegas, Nevada.

Fisker told The Street the EMotion will be shown alongside some of its next-generation technology, including an energy-dense battery pack, Ultracharger charging station, and built-in Lidar sensing system.

The Fisker EMotion promises, he says, a 400-mile range and the ability to the electric car and add 125 miles of range in just 9 minutes. It will support Level 4 self-driving capabilities sometime in the future.

Interestingly, the EMotion electric car’s specifications haven’t changed despite Fisker’s earlier statement that the car would not feature the solid-state graphene battery technology he had once promised.

Fisker and UCLA’s Nanotech dissolved their joint venture to create and engineer the graphene batteries earlier this year.

It would have been one of the earliest automotive applications of the technology.

Now, the Fisker EMotion is set to use battery cells from LG Chem, the company that supplies cells for the Chevrolet Bolt EV and other electric and plug-in cars.

Per Fisker,  the change from graphene to advanced cylindrical lithium-ion nickel-cobalt-manganese cells will not affect the Emotion’s performance credentials: the car will still be rated at 400 miles of range.

Fisker opened up pre-orders for the EMotion this past June: $2,000 down will secure a customer’s very own example of the car, which starts at $129,900. 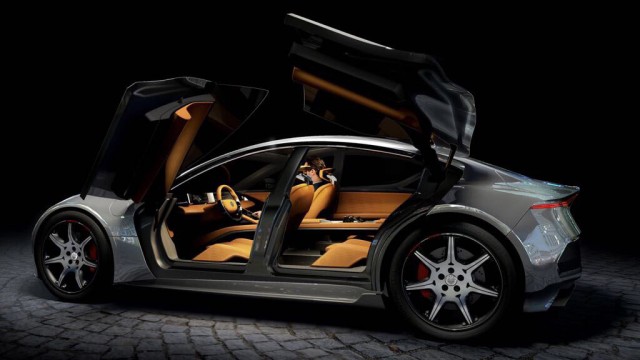 Fisker plans to ship the EMotion to its first customers sometime in 2019, though that date remains to be solidified.

The electric-car company has also said it hopes to introduce a range of cars to take on its main competitor: Tesla.

An affordable version of the EMotion electric car is slated for 2020 and will reportedly cost $34,000 before incentives, according to Fisker himself.

Fisker’s first company, Fisker Automotive, filed for Chapter 11 bankruptcy in 2013 and was sold to Chinese part supplier Wanxiang Group in 2014.

Wanxiang rebranded the company “Karma,” and just started to deliver an updated version of the former Fisker Karma—now dubbed the Karma Revero—this spring.