Talented Formula One race car designer and the father of the McLaren F1, Gordon Murray, in 2017 announced the launch of his own car company whose first model would be a supercar inspired by the McLaren icon.

On Wednesday, Murray provided the first details on the new supercar, as well as a tantalizing teaser sketch. The new car is called the T50 (the first car Murray ever penned was the T1 IGM Ford Special) and is due for delivery in early 2022. Just 100 will be built, each priced in excess of $2.5 million.

As he did with the F1, Murray will attempt to create the purest, most driver-focused car on the market, using technical know-how developed over decades of designing F1 race cars. This means a carbon fiber tub, a high-revving V-12, and even a downforce-generating fan. Yes, Murray is applying technology he designed for the famous Brabham BT46B “fan car” that Niki Lauda drove to victory in the 1978 Swedish Grand Prix.

For political reasons, Brabham chose not to run the technology for the rest of the season and the regulations were changed the following season to close the loophole that previously allowed it. Note, Murray didn’t create the tech. It had previously featured on the Chaparral 2J Can–Am of 1970.

Generating massive amounts of downforce without the added drag that most aerodynamic elements add to a car is the holy grail of designing fast track machines. In the T50, a fan 15.75 inches in diameter will sit out the back and literally suck air from below the car in order to create an area of low pressure, which results in incredible levels of downforce. It means the T50 won’t need to rely on excessive scoops and wings that create drag. Murray will be using a wind tunnel of an F1 team to hone the design.

Then there’s the engine, which will be a Cosworth-developed 3.9-liter V-12 with the ability to rev to 12,100 rpm, or higher than any previous road car. For those counting, it’s also 1,000 revs higher than what the AMG One and Aston Martin Valkyrie promise. A peak output of about 650 horsepower is the target, with Murray stating that lap records isn’t the goal of the T50, but rather driver involvement. The car will even come with a conventional 6-speed, H-pattern manual transmission. As Murray explained it, the T50 will be the last and greatest of “analog” supercars. 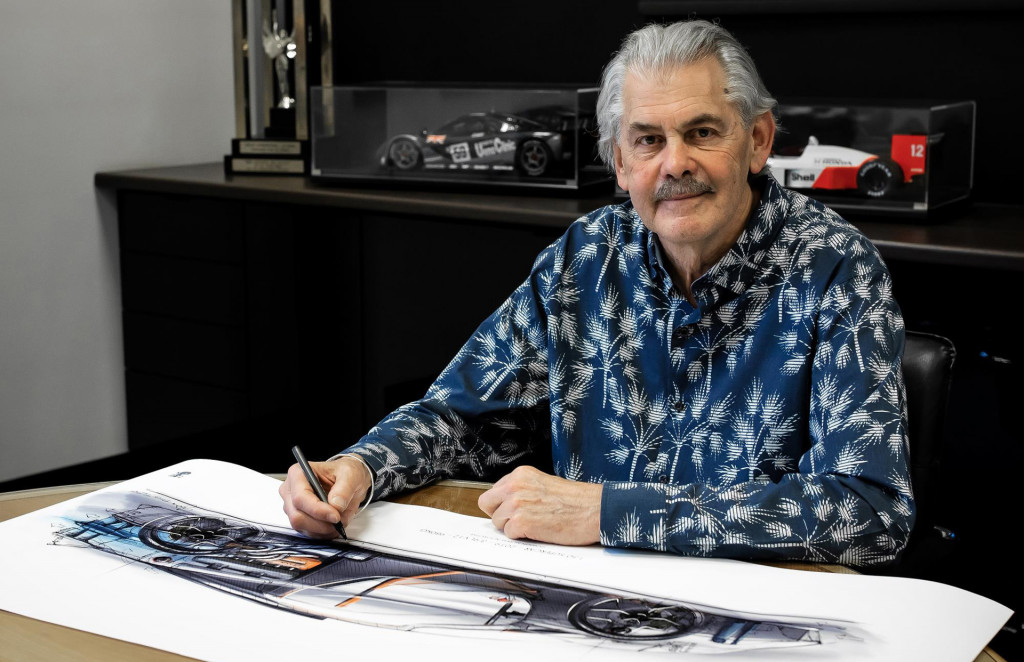 The engine will be mid-mounted in a carbon fiber tub no doubt developed using Murray’s lightweight, flexible iStream construction principles. The weight of the car is expected to be just 2,160 pounds, or about a third less than most supercars on the market. The T50 will be small, too, with the footprint to be smaller than a Porsche 911. The length will be about 172 inches.

Despite the diminutive size, the T50 will have space for three occupants—yes, three—and luggage. Murray has chosen to install a central driving position, just like in the F1. The downside is that the T50 won’t meet airbag safety regulations in the United States, so owners here will need to bring the car in via Show or Display rules should they want to drive it on public roads.

Handling the design work is Gordon Murray Design, while production will be handled by the new company Gordon Murray Automotive at a facility in Surrey, United Kingdom. Interestingly, Murray’s car company plans to continue adding models to its lineup, including minicars, hatchbacks, sedans, trucks, and potentially even an SUV.