NHTSA to Tesla: Stop claiming your cars are the safest

Federal officials told Tesla again in October to stop advertising the Tesla Model 3 as the having “the lowest probability of injury of any vehicle ever tested by NHTSA,” federal documents revealed.

The notice surfaced Wednesday by nonprofit PlainSite. The response runs 79 pages, with another 450 withheld at Tesla’s request.

In its letter, NHTSA Chief Counsel Jonathan Morrison called the statement “misleading” and said it forwarded the issue to the FTC’s consumer protection bureau because it wasn’t the first time Tesla violated NHTSA guidelines for advertising and communicating the results of NHTSA’s tests. In 2013, NHTSA took issue with Tesla’s advertising of safety scores for the Model S, saying the car had earned 5.4 stars on NHTSA’s rating system. NHTSA does not award more than 5 stars.

In the letter, Morrison takes issue with four statements that Tesla made in a blog post last October announcing the Model 3’s safety scores:

– …”NHTSA’s tests also show that it has the lowest probability of injury of all cars the safety agency has ever tested.”

– “The agency’s data shows that vehicle occupants are less likely to get seriously hurt in these types of crashes when in a Model 3 than in any other car,” and,

– “But when a crash happens in real life, these test results show that if you are driving a Tesla, you have the best chance of avoiding serious injury.”

The issue is that NHTSA doesn’t rank cars according to safety, and its front crash tests only compare cars of similar weight. 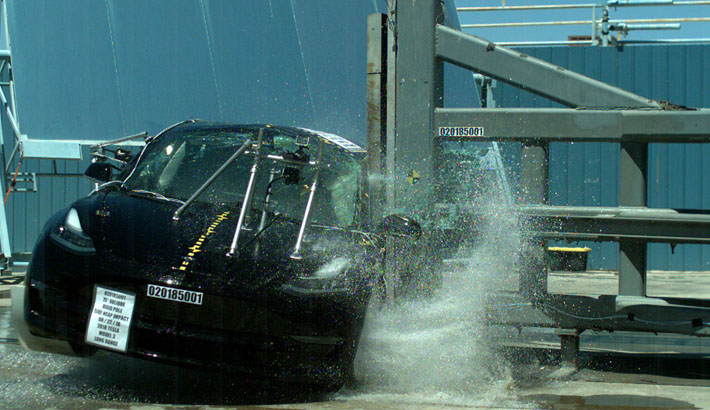 The agency has a five-star safety rating system, awarding more stars to cars that perform better in its battery of safety tests. The Model 3 earned five stars across the board, for having low risk of injuries to left- and right-seat front passengers in front crash tests, and left-side front and rear passengers in two left-side crash tests simulating being hit by another car and hitting a pole on the side of the road. The Model 3 also received five stars in NHTSA’s dynamic rollover-propensity test. Last month, NHTSA finished testing the all-wheel-drive Model 3 Long Range Dual-Motor, which earned the same five stars across the board, earning the entire Model 3 lineup the same across-the-board five-star rating.

All of that puts it at the top of the top tier of NHTSA’s safety ratings, but it doesn’t guarantee the lowest overall risk of injury in a crash, because NHTSA doesn’t rank those cars.

“This is not the first time that Tesla has disregarded the Guidelines…We have therefore also referred this matter to the Federal Trade Commission Bureau of Consumer Protection to investigate whether these statements constitute unfair or deceptive acts or practices,” the letter said.

The IIHS, which gives similar ratings on a slightly different set of crash tests, has not yet finished rating the Model 3.

In the letters, Tesla lawyers argued that it had independently calculated the risk of injury in federally tested vehicles with public data and determined that Tesla’s claim that it had the lowest probability of any car on the road. Lawyers also argued that with more cars rated at five stars in federal crash tests, it would be important for manufacturers to distinguish between models.

“Tesla’s statements are its own, are based on sound public data, and do not contravene NHTSA’s guidelines.” Tesla Deputy Counsel Al Prescott wrote Oct. 31, 2018.

Green Car Reports reached out to Tesla for comment on this story, but did not receive a response before publication. The disputed blog entry remains on Tesla’s website.