All those rusty buoys, boats, and piers along the world’s coastlines could be doing something much more useful, say scientists at CalTech and Northwestern University. They could be generating electricity.

In a paper released in the Proceedings of the National Academy of Sciences last month, chemistry professors Tom Miller from CalTech and Franz Geiger from Northwestern proposed devices that depend on rust and motion to power devices from lighthouses to medical implants.

The battery relies on a principle called the electrokinetic effect, which causes ions and electrons to flow back and forth in unison across physical structures.

Since saltwater—consisting of dissolved sodium and chlorine molecules—conducts electricity, the movement of salt water across a metal film—as when waves rise and fall, or the heart pumps saltwater through the veins—can generate useful amounts of electricity from electrons the saltwater pulls out of the rust.

Other scientists have long demonstrated the process in classrooms and labs using graphene as the metal conductor. The problem with graphene, which is also used as an anode material in some lithium-ion batteries in electric-cars and electronics, is that it’s expensive.

Rust happens everywhere, frequently unintentionally and spreads profusely, especially on cars, as well as boats, buoys, and piers in the ocean. Even when it doesn’t, it’s easy to make by exposing iron to water. 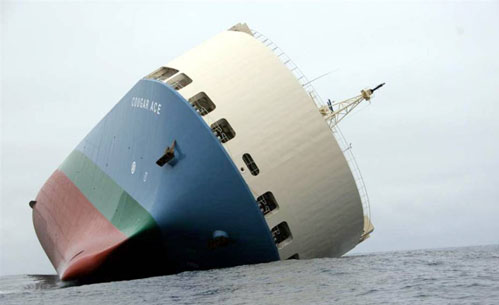 Update: Rusting Mazdas to be scrapped

In a statement released with their paper, Miller and Geiger said natural rust won’t work, because it varies significantly in shape and thickness. Instead, they used a physical vapor deposition method, similar to that used to make solar panels, to lay down thin, even sheets of rust about 10,000 times thinner than a human hair.

When they poured saltwater of varying densities across it, the rust developed a useful electric current of several microamps and dozens of millivolts per square centimeter. Since rust is cheap, the battery would be significantly cheaper to scale up than an equivalent battery based on graphene. That could amount to enough energy for a median home in the U.S. from a plate 10 meters square. “This is a more robust implementation of the thing seen in graphene. It’s basically just rust on iron, so it’s pretty easy to make in large areas,” Miller said, according to a report in Phys.org

It’s worth noting that the energy-generating devices depend on kinetic energy—motion—to generate electricity, so they likely won’t make their way to cars as new solid-state or flow batteries might. But they could be used to develop electricity for the grid to power electric cars—similar to desert solar arrays or off-shore wind farms today—which could have a significant beneficial impact in reducing carbon emissions.

← 2020 Ford Explorer Hybrid rated at up to 28 mpg combined First drive reveiw: The 2020 Volvo XC60 Polestar Engineered is made for Volvo enthusiasts →