It’s easy to make 1,000 horsepower. Just add boost, and make sure your engine can handle it. The engineers at racing firm Cosworth decided to do things the hard way. They developed a 1,000-hp naturally aspirated V-12 for the Aston Martin Valkyrie. Jason Fenske of Engineering Explained offers a deep dive into how they did that.

The Valkyrie engine (which is part of a hybrid powertrain) displaces 6.5 liters, meaning it develops over 150 hp per liter. It revs to 11,100 rpm (peak power is at 10,500 rpm), yet it’s also fully street legal, and Aston has said it will last about 60,000 miles before needing significant maintenance. That’s quite a long time for what is essentially a race engine.

The Valkyrie is the pet project of Red Bull Racing design boss Adrian Newey, and like the Formula One cars he pens at this day job, the Valkyrie was designed with its engine as a stressed member of the chassis. That meant reinforcing the V-12 to take structural loads, without making it too heavy. The engine tips the scales at 450 pounds. 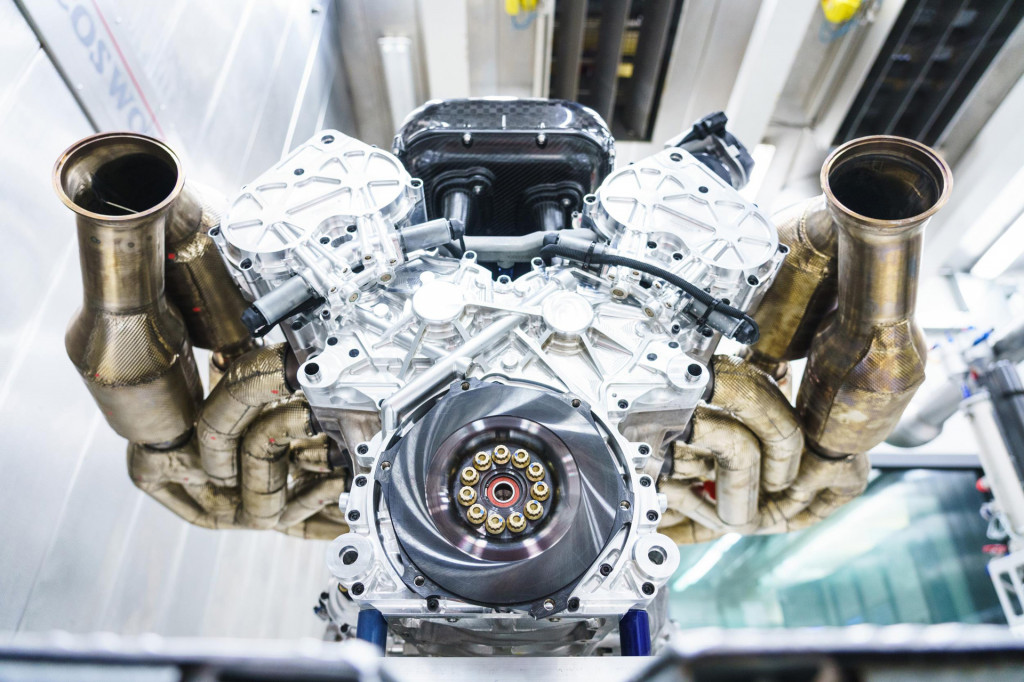 While the Valkyrie V-12 doesn’t have boost, it does have two other important factors in making power: high-revving capability, and large displacement. That combination allows more air to be fed into the engine, allowing for more power. It’s the reverse of the downsized turbocharged engines used in other cars, including Aston’s own Vantage and DB11. Those engines try to make up for smaller displacement by forcing more air in under pressure with turbos.

The engine’s high redline necessitated gear-driven camshafts, instead of a conventional timing belt or chain. The gears are located at the rear of the engine to reduce noise. The V-12 also uses port injection, rather than direct injection, because the latter would have required a particulate filter to meet European emissions standards. The engine does have four catalytic converters—two for each bank of cylinders.

Watch the full video for more details on this remarkable engine. Fenske also briefly discusses the engine for the upcoming Gordon Murray T50 supercar, which was also developed by Cosworth. Like the Valkyrie engine, the T50 engine is a high-revving (up to 12,100 rpm) naturally-aspirated V-12. However, it’s a bit smaller (3.9 liters) and develops less power (650 hp).

← How to do a forward 180-degree turn Alleged patent drawings may hint at redesigned 2021 Acura TLX, MDX →