Honda is aiming for two-thirds of its global sales to be electrified by 2030, and the launch of the 2020 Honda CR-V Hybrid plays a critical role in laying out the path to that.

To that 2030 goal, Honda aims for battery electric vehicles to be about 15 percent of its sales and hybrids 50 percent—the largest portion of its vehicle pie by the end of the decade.

American Honda Motor executives have said at various points that we can expect the U.S. to be roughly in line with this ratio at decade’s end. But in the interim, as Honda is more focused on EVs, like the Honda E, in Europe, it’s going to be more bullish on hybrids and a little more conservative with EVs in the U.S.

With the recent discontinuation of the Clarity Electric, Honda doesn’t have a fully electric vehicle in its U.S. lineup—and it isn’t expected to have another one until 2022 or so. “We will be introducing compelling BEVs in the coming years,” confirmed Sage Marie, American Honda Motor assistant vice president of Auto Operations, at the recent press launch of the CR-V Hybrid.

While Honda might be rightly criticized for its lack of EVs in its lineup, it points out that in the EPA’s tally of fuel economy and emissions by automaker, from its latest Automotive Trends Report, it ranks second only to Tesla among automakers, with a fleet fuel economy of 30.0 mpg and a tailpipe emissions of 296 grams per mile. Honda also notes that since 2011 it’s raised its fleet fuel economy 35% while the rest of the industry has averaged an 18% improvement. 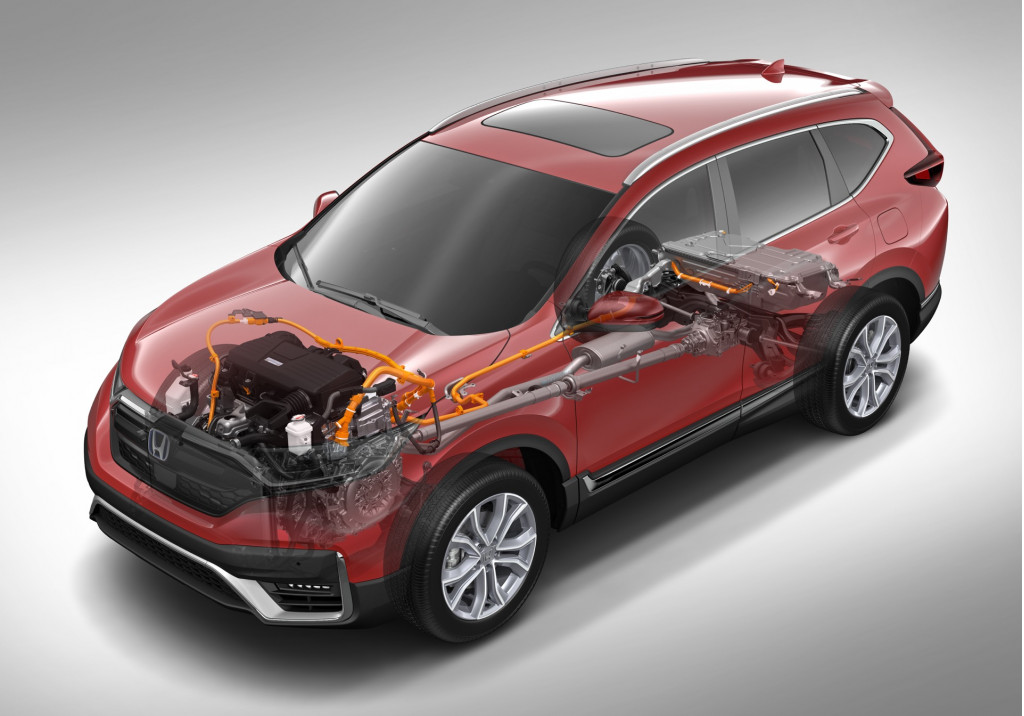 The CR-V is Honda’s best-selling vehicle for the U.S. market, and it’s sold about 380,000 CR-Vs annually for the past three calendar years.

At present, Honda can produce about 30,000 extra Hybrid models—limited by battery supply contracts. Most Hybrids will add volume to the CR-V’s pie as a whole, as they’ll go to those who weren’t considering the CR-V before, or perhaps to current CR-V drivers who might have looked around to another model like the RAV4 Hybrid. But it’s not going to be a niche model for long; look for the hybrid ratio to be boosted in the near future, and this is certainly one of the models for that acceleration. 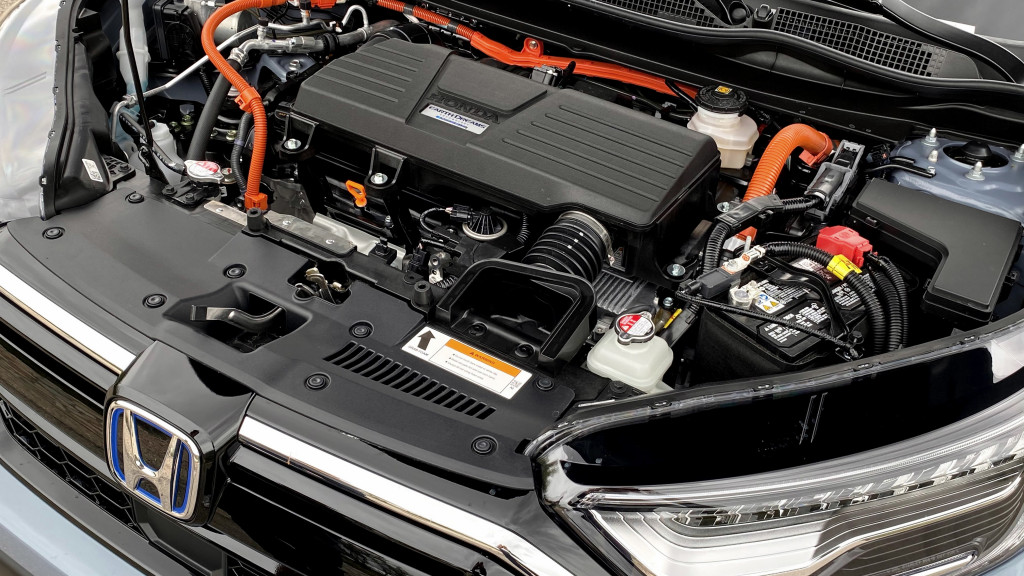 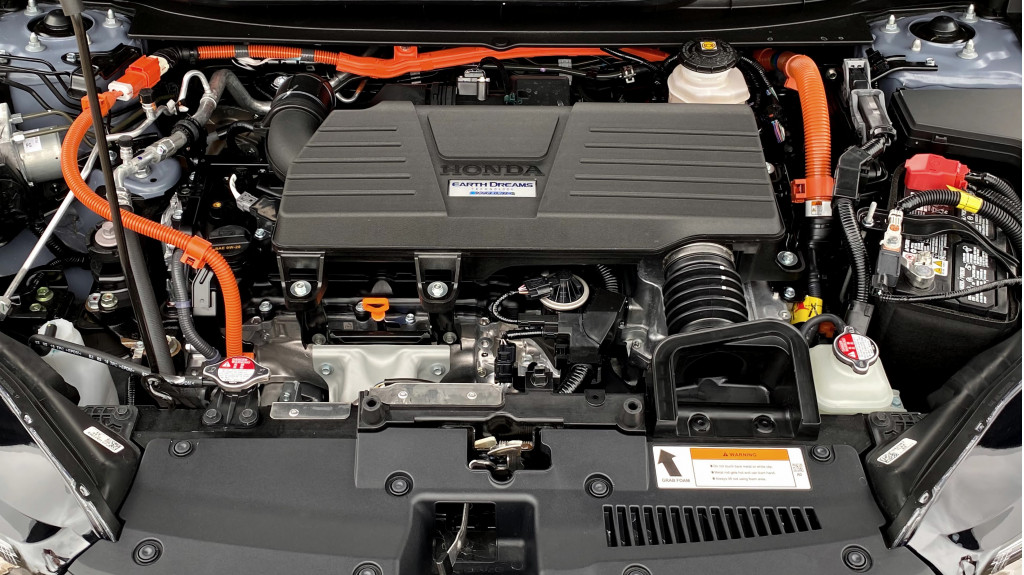 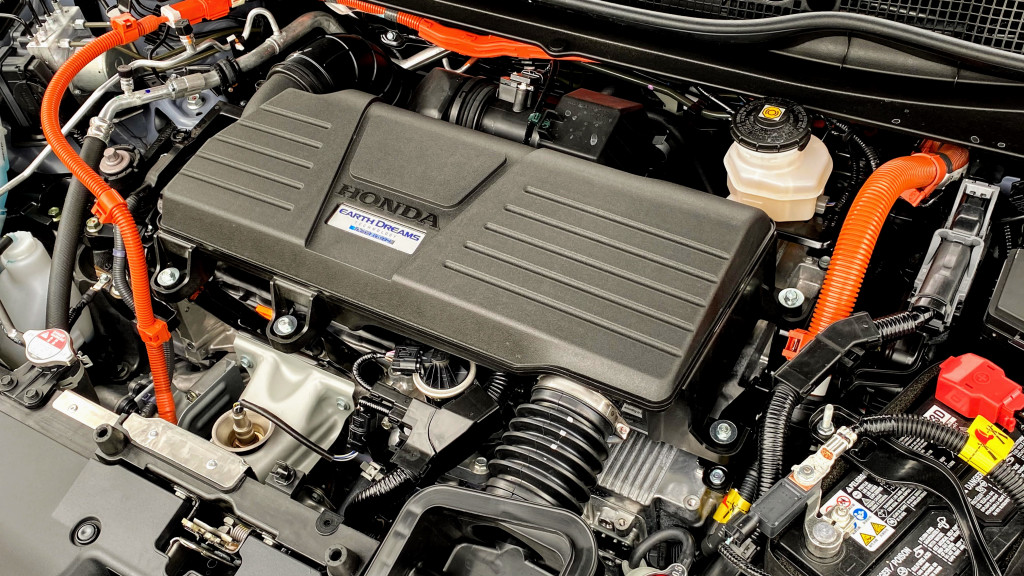 And to that more hybrid-heavy future, we decided to get a little closer with Honda’s two-motor hybrid system—and checked in with Naritomo Higuchi, the chief engineer for hybrid powertrain systems for Honda in Japan, for some more details about why the company employed its two-motor hybrid system the way it did in the CR-V and what we can expect from Honda’s hybrid systems later in the decade. Here are a half-dozen key decisions that make this system what it is—and a big part of Honda’s future.

Keeping it Real Time. Honda opted in the CR-V Hybrid to keep the non-hybrid CR-V’s mechanical all-wheel drive system, called Real Time 4WD, with a propshaft to the rear wheels, instead of adding a new motor at the rear wheels. Higuchi said the decision was made given what it saw as the requirements for the CR-V—and since 65% of CR-Vs are bought with all-wheel drive, finding an all-wheel drive solution that had the full ability set (like churning through sand) was deemed critical. 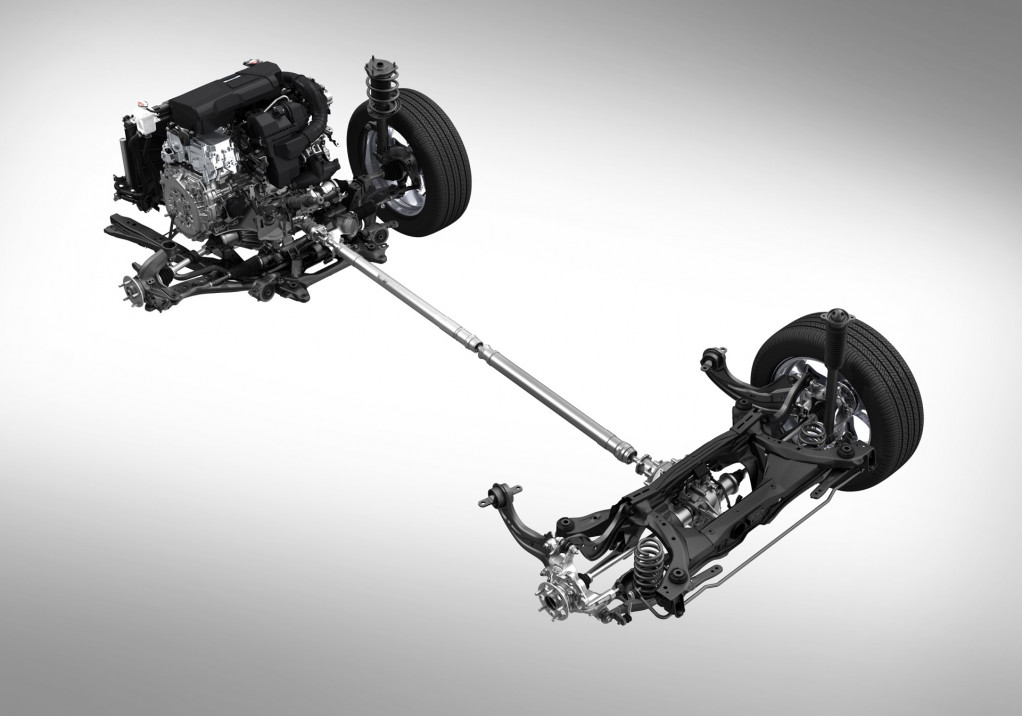 Three-motor a possibility. Higuchi didn’t say this was the only way Honda planned to employ all-wheel drive with its hybrids, and he wouldn’t rule out an over-the-road system for AWD (using a motor or motors in back) in a future Honda model. It’s used, after all, in the three-motor SH-AWD hybrid system in the Acura MDX Sport Hybrid and RLX Sport Hybrid. “We also have that technology that we can apply, and we’re looking at the characteristics of the vehicle and the required performance,” he said through an interpreter.

Above and beyond for a consistent feel. One thing we admired on our drive of the CR-V Hybrid was the predictability and consistency of the accelerator’s response and of the three modes of engine braking. And Higuchi revealed an interesting detail: For safety, even if the hybrid battery becomes full on a long downhill grade, Honda has found a way to preserve the same level of regenerative braking—by sending electricity from the traction motor over to the starter/generator, which spins the engine a little higher just to use that energy.

From generator to motor. One of the key distinctions of Honda’s system, Higuchi said, is that “as much as possible we don’t send the electricity through the battery to the motor.” As much as possible it’s sent directly to the traction motor, eliminating that efficiency loss. In various cases the battery acts as a buffer, to help provide enough power when more is needed suddenly. But overall the strategy helps keep the battery smaller, keeping both cost and weight down. The whole hybrid powertrain is just 198 pounds heavier than a comparable gasoline vehicle.

Full acceleration uses battery boost. Maximum performance does depend on the battery, Higuchi confirmed—so if you have a low state of charge the CR-V Hybrid won’t dash to 60 mph quite as quickly as the nine seconds we observed. The system works to keep the battery state of charge around 50 percent, to be ready for sudden performance needs or extra energy. And 50 percent would definitely access the max performance, he confirmed. It’s again part of keeping weight at a minimum.

What does Honda’s next generation of hybrids hold? Higuchi was quick to say that the next step toward developing a more efficient hybrid system isn’t the battery; it’s the engine. With Honda’s last round of improvements to the two-motor system, it increased the most efficient range of the engine—the width of the engine’s efficiency “sweet spot”—and it’s now operating about 90 percent of the time in its most efficient range. Future development is focused on raising that absolute value, he said, and pushing the whole efficiency curve up with a higher max efficiency.