Lincoln leadership balked when the preliminary studio designs came in for its new large premium sedan. “We were initially not pleased,” said brand president Kumar Galhotra. “But once we told the design team they were working on the new Continental, it totally changed the mood. With the sense of responsibility that comes with that name, the energy just went way up.”

The result of those efforts is the all-new Lincoln Continental, which makes its world debut at the 2016 Detroit auto show. And although Lincoln’s new luxury sedan is all about “quiet luxury,” the production version makes the same bold, loud statement as the concept that was shown one year prior. The gist of it? Lincoln is back, and the Continental gives the brand a fighting chance at reclaiming its long-lost glory. 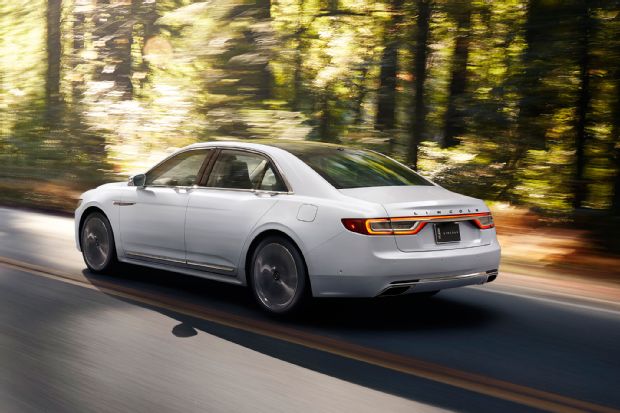 Quiet is the new loud

Like the concept, the production Lincoln Continental has a refreshing simplicity and clarity. Up front is Lincoln’s new chrome-mesh grille, which we first saw on the refreshed MKZ. The chrome trim carries over to the window surrounds, rocker sills, side scuttles, and full-width rear taillamp detailing, but it surprisingly doesn’t come across as overwhelming thanks to the Continental’s otherwise tidy lines.

The Lincoln Continental looks particularly sleek in profile, where the door handles are cleverly integrated into the beltline without the usual door pockets. Using a new electric latch release, the doors open at the touch of a button and can automatically close with an available power-cinching feature. “The handles are ergonomically perfect,” says Galhotra. “Everything about the Continental strives for elegant beauty, a serene experience.”

Signature LED lighting up front carries over from the concept, but with an added touch of elegance for the production car. As the driver approaches the Continental with the key, the lighting scheme on the headlights, taillights, lower front fascia, illuminated welcome mat, and interior slowly fade on. The finishing touch is an available panoramic sunroof that covers nearly the entire roof, with a front section that slides over the rear like in the MKZ sedan. 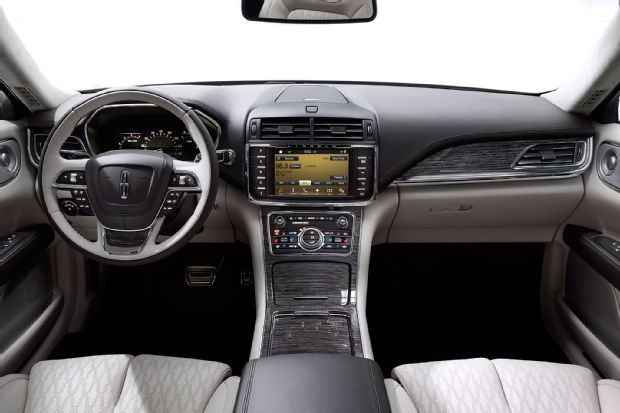 An interior fit for a flagship

For all those who have long complained that Ford DNA was too evident in Lincoln products, the Continental’s interior will be a breath of fresh air. “On our seats alone we’ve been granted over 50 new patents,” says director of product planning Scott Tobin. These so-called Lincoln Perfect Position seats, engineered in-house, feature 30-way adjustability with massage, heating, cooling, and independent thigh extensions for each leg.
In addition to the new configurable instrument cluster and re-engineered center console, the Lincoln Continental gets a high-end Revel audio system with Active Noise Control and acoustic laminated glass. Generous use of leather, aluminum, and wood or aluminum add a nice touch of class — clear indications that Lincoln’s flagship is in a league of its own, well north of Ford’s Titanium trim. 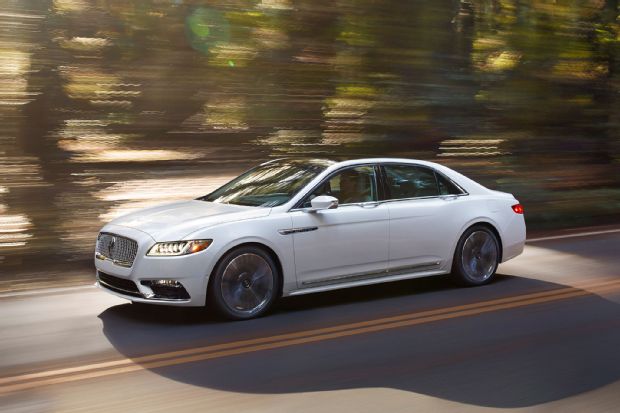 There will be three available engines for the new Lincoln Continental, but it’s the brand-exclusive 3.0-liter twin-turbo V-6 that will make waves. As in the refreshed MKZ, the new engine makes 400 hp and 400 lb-ft of torque, paired with standard all-wheel drive and advanced torque-vectoring control.

For China there will also be a 2.0-liter turbocharged four-cylinder engine and front-wheel drive, as well as the top-trim 3.0-liter V-6.

Adaptive steering will also be available on the Lincoln Continental, along with three-way adaptive suspension settings. A full tech suite including automated park assist, a 360-degree camera, automatic emergency braking, and adaptive cruise control will all be available. 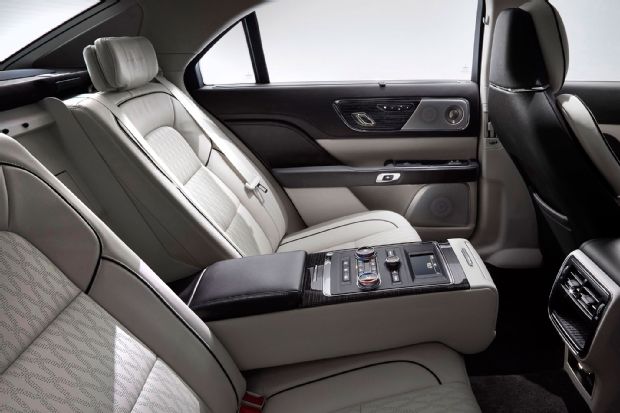 What’s in a name?

For all of its forward-looking technology and modern styling, the Lincoln Continental is about heritage as well. “Names are very powerful and emotional,” says Galhotra. “The ultimate luxury in Lincoln is represented by the Continental name.”

According to Lincoln, the brand’s heritage is distilled into the new mantra of “quiet luxury.” Galhotra and Tobin promise that the brand will be about sophistication and refinement, not hood scoops and exhaust notes. “Somebody else can try to beat BMW at the Nurburgring,” says Tobin. “That’s not us.”

We should expect the Continental to eventually adopt electrification, though. Lincoln won’t confirm it’s in the works right now, but Galhotra was clear that Lincoln will continue to benefit from Ford’s advances in plug-in hybrid technology. And Lincoln’s target customers, the so-called “Creative Elite,” have a vested interest in alternative powertrains.

There are plans for two more vehicles in new segments that will eventually follow the Lincoln Continental. But right now is about the flagship sedan’s time in the limelight, under the snowy gray Detroit sky and bright lights of Cobo Hall. Here’s hoping it’s just the beginning.