5 Things to Know about the 2017 Honda Ridgeline

January 11, 2016 1:45 pm
2.7k
SHARES
Share on FacebookShare on Twitter
Eleven years after the original Honda Ridgeline provided a different take on the pickup truck, Honda has returned with the 2017 Ridgeline just as the midsize truck segment heats up a bit. While many of its predecessor’s innovations remain, like the in-bed trunk, Honda largely took a different approach in developing this second-generation truck. We learned more about the new Ridgeline at its debut at the 2016 Detroit auto show.

The original Ridgeline emphasized its oddities with bizarre, out-there styling that looked nothing like any other pickup truck. Without the flying-buttress C-pillars and distinctive front end of its predecessor, the new truck looks more conventional…and less interesting. Honda product planner manager James Jenkins says this shift to a less daring look was intentional. “More traditional styling was the way to go,” he explains, saying that the truckier styling is meant to broaden the Ridgeline’s appeal. We only wish it didn’t look so much like the bland Pilot crossover with a pickup bed.

“Let me be clear here, this is a real truck.” 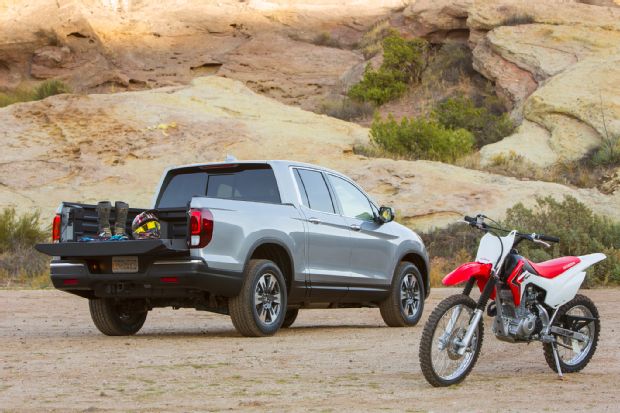 That’s what Honda America’s executive vice president John Mendel said as the new Ridgeline rolled onto the stage in Detroit. And while its front-drive-based, unibody platform may suggest otherwise, Honda says the Ridgeline’s towing and payload numbers will be competitive with other midsize trucks. Honda hasn’t actually provided those numbers quite yet, but the Toyota Tacoma’s 1,620-lb max payload and 6,800-lb max towing should give us some idea of what the Ridgeline will achieve. 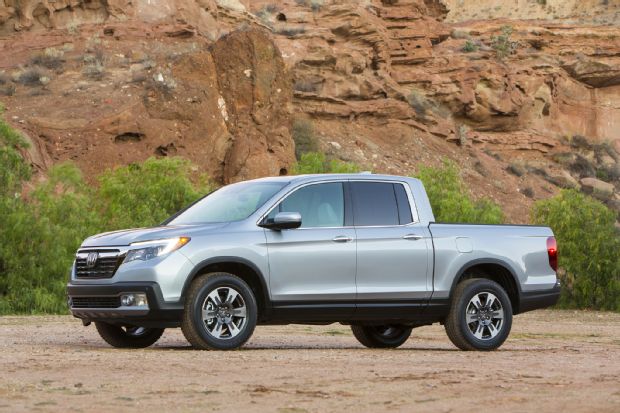 A newly available front-wheel drive version of the Ridgeline surely won’t help Honda win any favors with truck traditionalists, but Honda has its reasons for offering such a model. Fuel economy numbers will be higher in the FWD Ridgeline, and Honda hopes to attract more buyers with a lower price point. Expect the so-called i-VTM4 system to cost around $1,800 extra, as it does on the closely related 2016 Honda Pilot.

Safety and on-road driving dynamics were the top priorities

You can see Honda’s emphasis on safety all across its lineup these days, and the Ridgeline is no exception. It will offer active safety tech like lane departure warning, forward collision warning, lane-keep assist, and blind-spot warning.

The second most important benchmark was to maintain the Ridgeline’s car-like ride and handling, an advantage afforded by its car-based chassis. “You’ll feel like you’re in an Accord,” Jenkins claims. He even thinks that the Ridgeline’s superior on-road performance, combined with its towing and payload capabilities, could lure buyers away from full-size trucks. “It’s all about educating the consumer,” he says. “364 days of the year, you don’t need a huge, body-on-frame pickup.”

Speakers in the bed 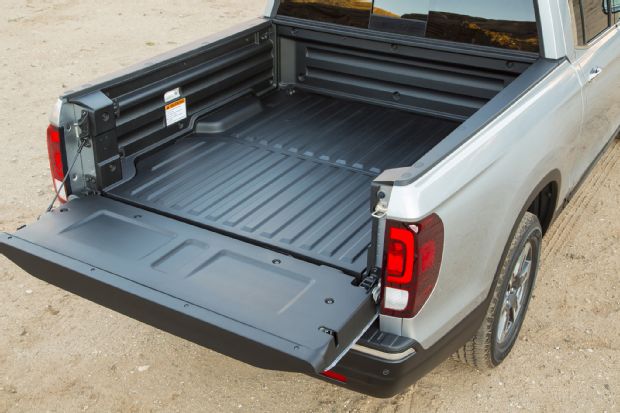 If the drainable trunk and power outlets in the bed don’t already make the 2017 Honda Ridgeline perfect for tailgating, the new built-in bed speakers are sure to convince you. Because conventional speakers wouldn’t be durable enough to be left out in the open, the Ridgeline features six exciters embedded into the bed walls that can be controlled by the dashboard interface to provide 540 watts of sound.